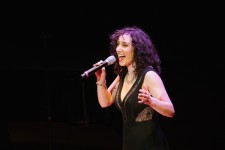 A Swinging Tribute to the Gershwins with Gabrielle Stravelli

The New York Times compared Ms. Stravelli to “Ella Fitzgerald in her prime,” and she has performed in many of New York’s most prestigious venues, as well as concert halls, around the world.

The concert will feature the Gershwins’ contribution to the Great American Songbook including dozens of hit songs, including “Someone to Watch Over Me,” “’S Wonderful,” “Summertime” and “I Got Rhythm.”

“Strike up the Band,” at the Axelrod Performing Arts Center on Sunday, May 26 at 3 p.m., will feature Stravelli, joined by a 17-piece swing band, including acclaimed jazz pianist Dr. Art “Jazz” Topilow and clarinetist Carl Topilow, conductor of the Cleveland Pops Orchestra.

“The songs of George and Ira Gershwin have remained a vital part of our American musical landscape for a century,” said APAC Artistic Director Andrew DePrisco. "No matter when they were composed, I believe that truly great songs never age; they continue to feel new and timeless.

When a singer as naturally talented as Gabrielle Stravelli brings her special gifts to two dozen songs by the Gershwins—that’s a holiday event worthy of letting the drums roll out and the trumpets call!”

Award-winning vocalist and songwriter Gabrielle Stravelli (who grew up in Colts Neck, New Jersey) has garnered critical acclaim and a loyal following through her rich sound, original compositions and her unique take on material from the Great American Songbook as well as by contemporary artists.

A trained actress, The New York Times noted that Stravelli’s “emotional intelligence coincides with a phenomenal voice that she wielded with an easygoing confidence and impeccable taste.”

This month, Stravelli released her fourth album, titled “Pick Up My Pieces,” which is a tribute to Willie Nelson.

Stravelli began singing at age 15 as a soloist with the Orchestra of St. Peter by the Sea in New Jersey and has since performed on stages from Amsterdam to New York. She has been featured at the Caramoor Festival, Jazz at Chautauqua, Lincoln Center’s Midsummer Night’s Swing, Birdland Jazz Club, 92Y’s Lyrics and Lyricists Series, Cornelia Street Cafe, 54 Below, Merkin Hall at Kaufman Center, the Iridium Jazz Club, and the New Jersey Performing Arts Center (NJPAC), where she opened for Esperanza Spalding and Cassandra Wilson. She sings with a “forceful emotional presence and a versatile, well-shaded voice,” says Adam Feldman of Time Out New York and Peter Haas of Cabaret Scenes describes her voice as “clear and clean, expressive, supple, with unforced power.”

Tickets ranging from $39-$46 can be purchased online at www.axelrodartscenter.com, by phone (732) 531-9106, x14, or in person at the Axelrod Performing Arts Center, 100 Grant Ave., Ocean Township. The theater offers ample, free on-site parking and is completely handicap accessible.

About the Axelrod Performing Arts Center